It’s been a while since my last devblog (to put it lightly). Content progress has continued, and I’m sure I’ll get into some of that later. But what I’ve also been doing (continuing somewhat the theme of the last devblog), is working on adding some polish to the game.

Maybe that’s a bad idea, maybe you shouldn’t polish a game until it’s finished. I don’t know how you’re “supposed” to do things like this. Psychologically, though, it’s been helpful for me, because it makes the game look more like an actual game people might play rather than some hacked-together piece of crap. It’ll also make for better screenshots, and a more enjoyable dev release, whenever the next one comes.

The fact of the matter is, as inconsequential as some of these types of features might be, they’re essential to people wanting to play the game. No matter how good the gameplay is, if it feels and looks off, it’s going to turn people off. Little features like these go a long way:

First, and most usefully, abilities with areas of effect now show where the effect is going to be:

Not as essential, but probably still useful thing is making damage more visible. The old dev version did have numbers that rose from a creature showing how much damage was done, but now I’ve also made them flash and get knocked back a bit when they get hit.

Special damage types also have animations that flash over a creature who’s been damaged:

The game now warns you when you’re about to move into a dangerous area (ie lava if you can’t fly, or next to a creature if you’re a ghost). This should hopefully cut down on annoying accidental deaths caused by running too fast without paying attention. 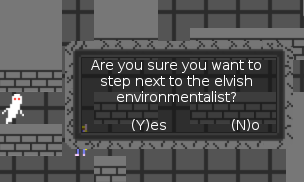 Never stand next to an elvish environmentalist…that all-natural deodorant doesn’t work too well.

I don’t see why I wouldn’t be sure.

And graphics for certain features, such as splashes that show up when they go into the water (or sewage, as the case may be), and making it look like they’re actually standing on a bridge instead of on the side of it.

The ratking and ugly vampire have a nice chat while standing in sewage.

The ghost has no friends to chat with in the sewage, and also doesn’t make any splashes because it flies. 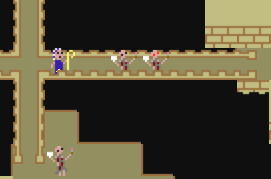 On the bridge over the river of the dead. Who’s that mysterious stranger on the left?

Oh also, corpses finally show up in graphics mode, instead of just as colored % signs.