Wow, I knew it had been a while since the last post, but I didn’t realize it had been a year. Hold on, this is gonna be a long one.

For a while, I wasn’t really doing much work on Possession 2 at all. Actually, going by my notes, from May until August I didn’t do any work on it at all. Going from working at night to a “normal” 9-5 job left me worn out and feeling like I didn’t have the energy to really do anything after work. That’s been getting better (partially due to other reasons), so I’ve been getting more work done. Sometimes taking a break for something and coming back to it gives you a lot more motivation to work on it; I’m finding working on the game much more enjoyable than I did a few months ago.

Another big event happened as well, which I think is also a big help with motivation to focus on the game: 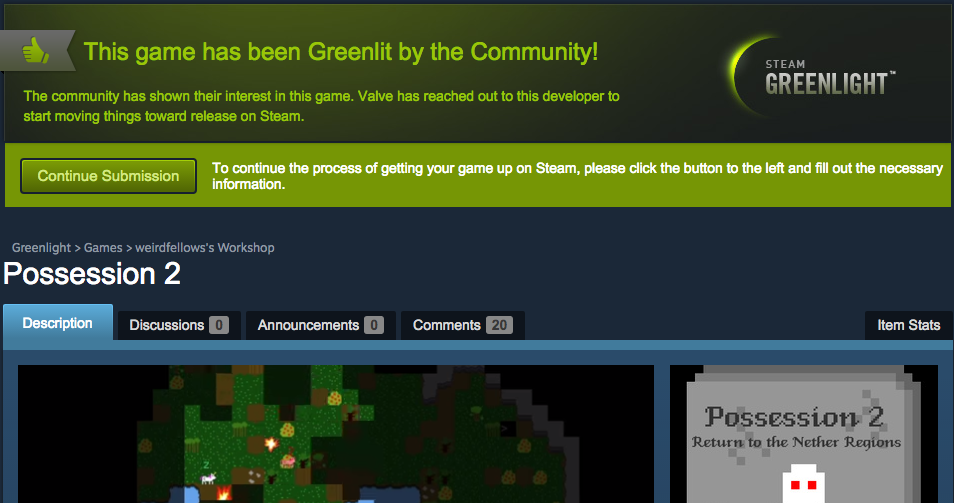 For those who don’t know, that refers to Steam Greenlight, the process by which you get on Steam, which is the largest platform for PC game distribution. In a nutshell, you post up screenshots and description of your game, and people vote if they want to buy it or not. Eventually, if you get enough votes (or something, it’s kind of an opaque process), you get “greenlit” and are allowed to sell the game on Steam (after filling out a bunch of paperwork and stuff first, of course). Honestly, I’m not sure how it happened, because I was nowhere near the top 100 games on Greenlight, which is what general consensus says is where the games that move on are chosen from, but whatever, I’ll take it.

So what else has happened in the past 12 months?

One big feature that’s in the game now that I’d been putting off for a while because I thought it would be a pain in the ass (but ended up being really easy) was saving. And unlike the first game, you can have multiple saves! That is, multiple characters saved at once, not multiple saves per character. It’s still a permadeath game. I’m not entirely sure if you’d necessarily need to have multiple characters saved at the same time, but why not. 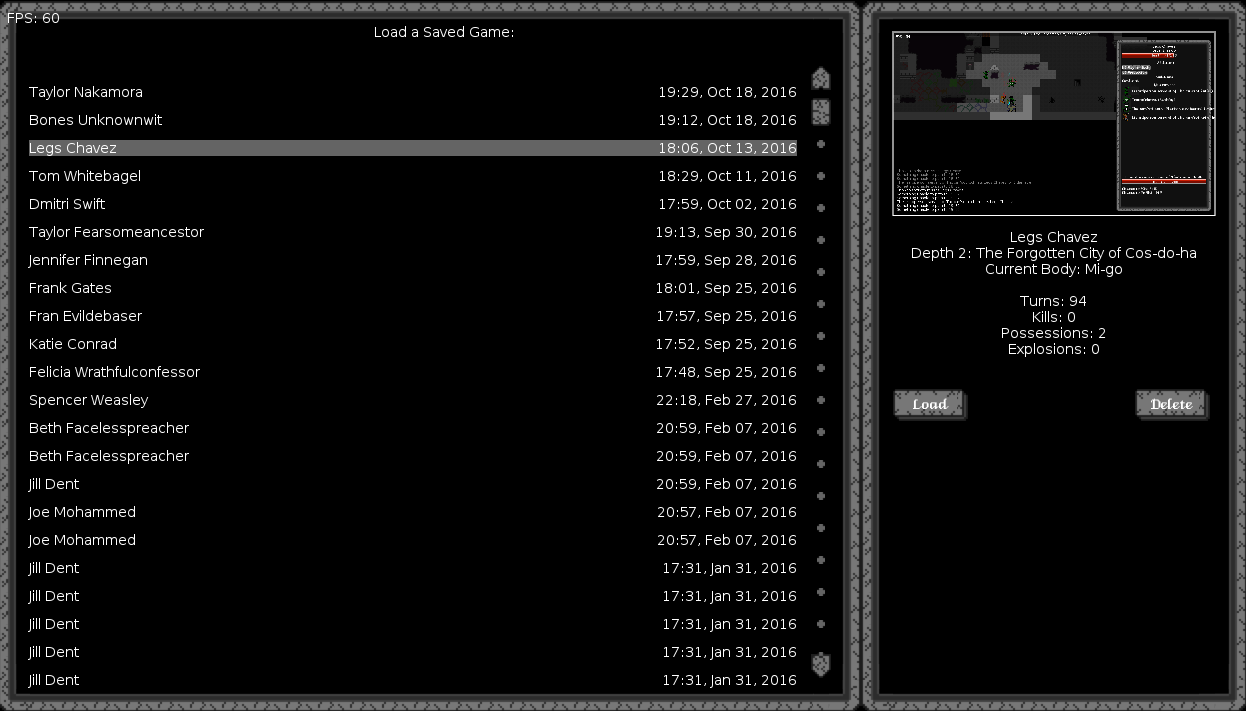 I’ve also tweaked possession itself some. Possessing other creatures is generally much harder, especially if they’ve noticed you. However, if you try and fail to possess something, it weakens their resistance to it, so if you keep plugging away you’ll eventually get them (unless they’re unpossessable entirely, but the game will let you know about that).

The possession ability now also has a cool down if you’re not in ghost form. Every time you possess another body, it increases by one. And, when you possess a new body, you’ll have to spend a few turns adjusting to your new body. The number of turns increases the more bodies you possess as well. Combined, these changes make it a lot less optimal (or possible!) to just hop from body to body in combat. You actually have to fight now.

Making things harder to possesss also adds more risk to the player, so I’ve also added warnings that let you know if a possession you’re about to try could put you in a dangerous position if you fail. 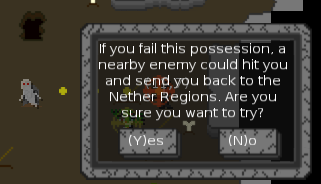 Another minor quality of life change, creatures that haven’t noticed you have their colors muted, so you can tell at a glance who is paying attention to you. This is in both the graphical and ASCII versions:

Speaking of graphics, I’m currently in the middle of a pretty large project involving the creature graphics. The way I make the graphics is I first draw them in a 16×16 pixel sized image, then blow it up to 32×32 pixels, which gives it the chunky pixellated look. The program I was using at the time (Pixelmator) automatically anti-aliased the graphics when they were resized. At the time, I liked it, because it gave a little texture to them, and I didn’t mind the blurriness because I thought it made it look kinda old-school, like sprites on a CRT TV or something. But over time (and seeing it on higher-resolution screens), I realized the blurriness is not great, so I’m redoing the graphics in a new version of the program that lets me resize them without anti-aliasing:

The good news is, most of the files I saved in the 16×16 format, so I don’t need to redraw most of the graphics, just resave them. I’m not sure if it’s going to be worth it to redo all the level graphics or just the creature ones.

But, because I like making more work for myself, I’m also adding animations to all the creatures. The screenshot jumps a little because not all the animations loop at the same time, but it covers the general gist of the idea.

I think it’ll make the game world look a little more interesting and alive, but I’m adding in an option to disable them if the player disagrees. These animations also will obviously only appear if graphics are enabled, not in the ASCII version.

And exploding a creature is a little more dramatic now…although unfortunately my screen record software’s framerate is too low to really show it off. You’ll see what I mean soon.

I’ve also added (optional) tutorial messages that show up as you play the game.

In addition to UI stuff and graphics stuff, gameplay and content work has of course continued…including on the three levels that were in the demo. There will be some changes to the Eldritch City level including “open” rooms, differently shaped rooms (which I may talk about in a later post), lights and decorations: 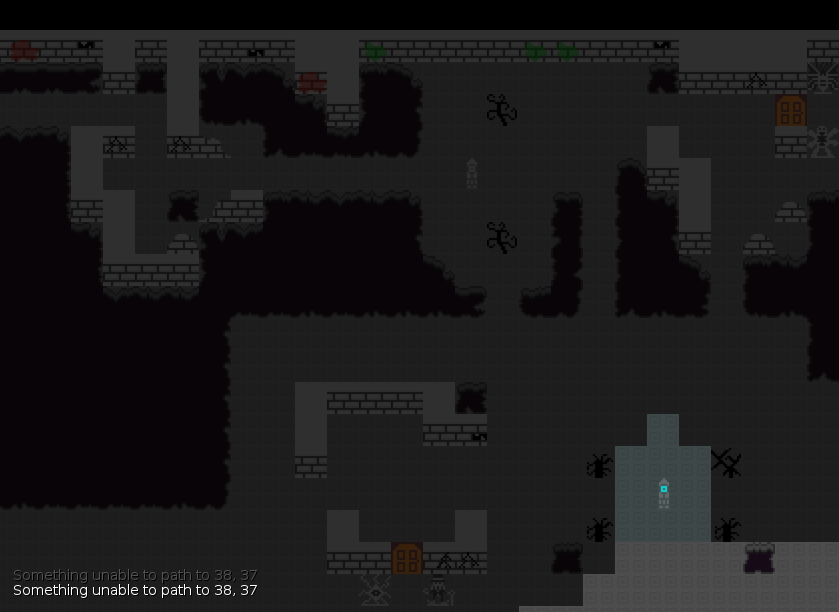 I’ve also tweaked a lot of the enemies’ powers and behavior on all three levels, so things might play a little bit different from last time.

Last but not least, music! Originally, I was in talks with someone to make music for the game, but that’s fallen through, so I’ve been playing around making some cheesy tracks on my own. I don’t know if they’ll be ready for the next preview build or not, though.

Speaking of, when is the next preview build? Since it’s October, I’m hoping to aim for a spoooooooky release date of Halloween. That’s less than a week away, though, so we’ll see.

With this preview release, I’m hoping to almost all the interface and backend stuff done (aside from changes that might come up through feedback from player testing, of course). Pretty much everything left to do will be content/art/music (knock on wood), and most of the rest of the levels and creatures are at least partially-implemented.

As for when everything will be finished? All I’m prepared to say for certain is “not this year.” Beyond that, I’d like to make a promise or even a guess, but given my history on working (or, more accurately, NOT working) on this game I don’t think that’s smart. After all, I originally planned on finishing the game in a year, and we can see how well that turned out. I’ll just say that at this point, I really do feel like finishing it is actually achievable, which, if I’m being honest with myself, is not always something I’ve believed to be true over the past year or so.