Putting Possession 2 up on Greenlight was a bit nerve-wracking. It’s the first time that the game was going to be exposed to the general public. Luckily, comments seem to be mostly positive (at least the ones I could understand), and the negatives have mainly focused on the graphics, which I expected. 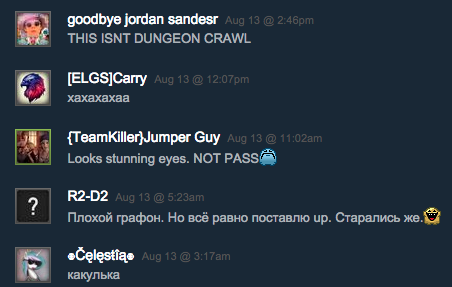 I’m not sure what to make of any of these, but I’m hoping the Russian ones at least make sense in Russian…

We’ve still got a ways to go, though, so if you’re on Steam, help us out by giving us a vote!

Someone’s actually made a video of himself trying it. I’d link to it, but for some reason he’s taken it down. If you make games — or any other kind of program or app — I cannot stress how helpful it is seeing someone who’s never seen it before play it and try to figure it out, especially if they describe what they’re thinking as they do it! When you’ve been working on something for a long time, you take a lot about how it works for granted, and forget that things might not be very obvious.

Most of the feedback I got from this video was interface-related (as well as noticing a few bugs that had slipped by). This particular person clicked through to the game immediately, skipping the how-to-play (which I expect most people will do). They also only used the mouse, not the keyboard, but still actually managed to do pretty OK, considering. Obviously I need to put in some kind of in-game instruction or tutorial mode, which I haven’t done yet, but I did add the possession ability to the sidebar (the guy who made the video only possessed stuff by clicking on them when he was next to them). I’ve also added ability buttons to the sidebar, to make it easier to play with just the mouse.

He also didn’t realize that you could change the name on the new game screen, and had trouble getting off the screen, so I made that a little more obvious too, and added an actual “begin” button: 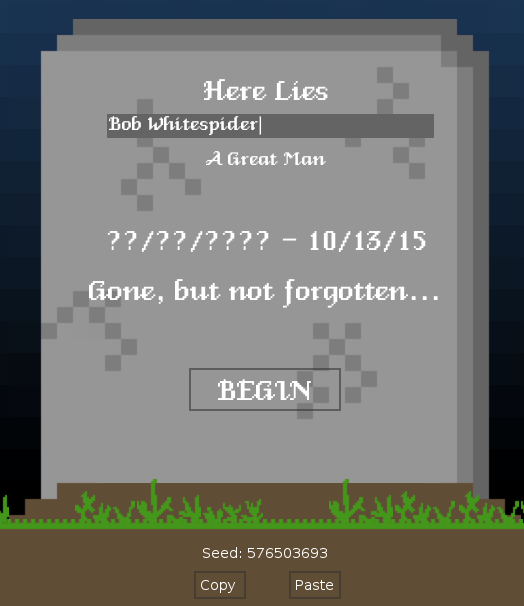 Gender options aren’t in that shot, but they’re sill available. They’re just hidden until you move the cursor to the gender section.

You might notice a new section on the new game screen, the seed. This is the seed used in the random number generator to generate the levels (and only used to generate the levels). Putting in the same seed will cause the levels to generate identically, although any randomness that happens during the course of the game will be different. This will let people run challenges to see who can get through the same levels faster, or whatever. It also makes it easier for me to test bugs and changes in the level generation code by generating the same level after changing the code. I honestly should have done this a while ago when I was doing more work on the level generator, but oh well.

On a gameplay front, the main feedback I’ve gotten is that possession is too easy. It’s generally the best option in any situation, rather than fighting, just possess all the enemies and blow them up. While I don’t want it to be too hard, to prevent people getting stuck as a ghost and dying because they failed to possess something a dozen times, I also don’t want it to be the obvious best option. There’s no point to having such a wide variety of monsters and abilities if there’s never a real reason to use them.

I’ve got some ideas on how to fix this, but that’s a topic for later.

If you haven’t played the preview build yet, check it out!