It’s been almost five months since the last blog post, I guess we’re long past due for another one.

Unfortunately, I haven’t gotten nearly enough work done considering the amount of time that’s passed. In truth, missing my one-year deadline kind of bummed me out for a while, and then the holidays came to distract.

Still, I have gotten quite a bit done. There’s a new special level in, the Mines. It’s a pretty dangerous place even aside from the monsters, since it’s filled with rocket-powered minecarts, lava and explosive barrels. 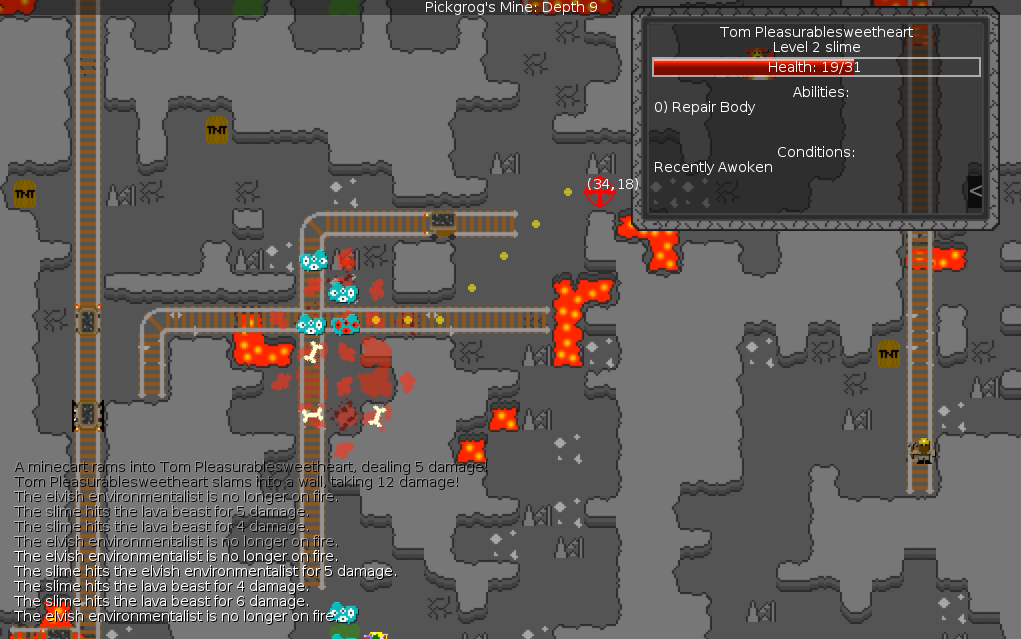 I’ve also been doing a lot of work that is pretty unexciting (but necessary). Some UI and polish work, like scrollbars in the message log and monsterpedia. 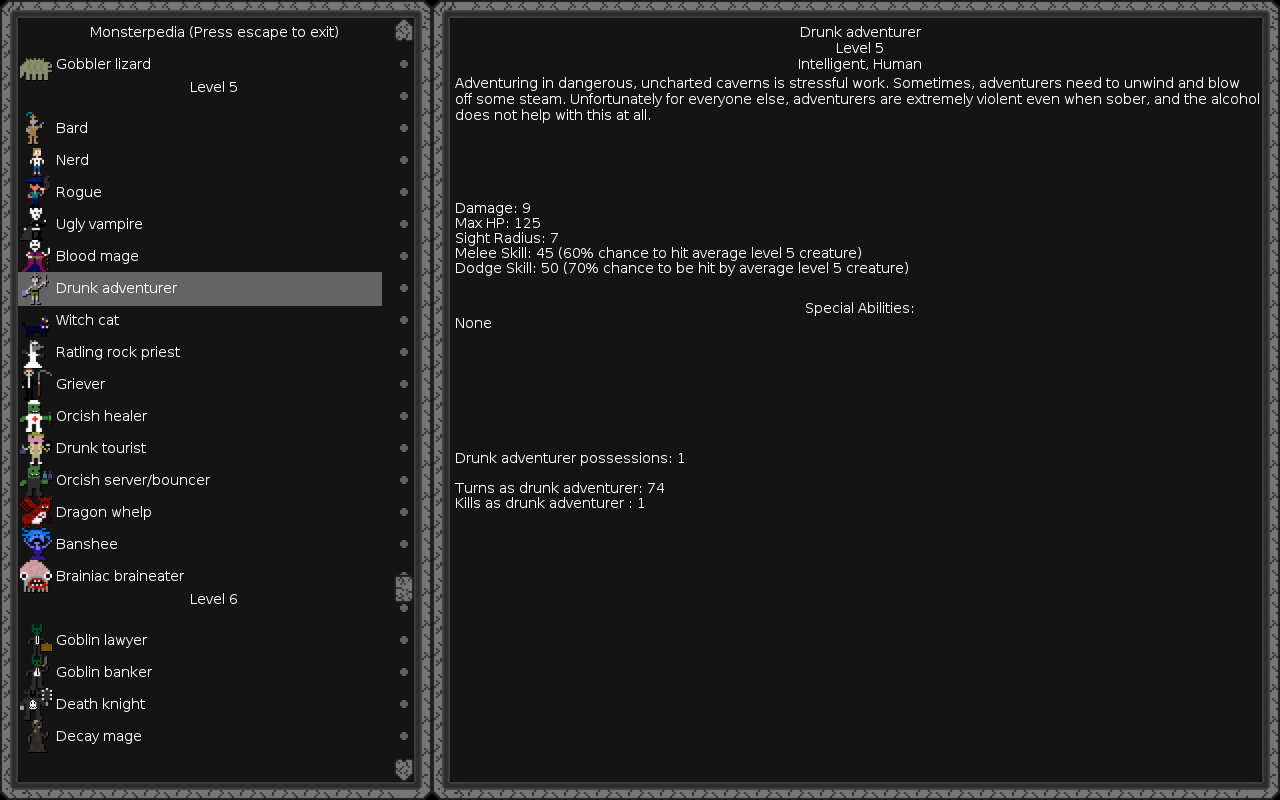 Try to contain your excitement.

The game has rudimentary mod support now, which is kind of exciting, but again, doesn’t make for a great screenshot.

There are also sound and music systems implemented. I haven’t decided what I want to do for the music yet (ambient noises? regular music? chiptune?) but I have found and implemented a lot of sounds for monsters and spells. They obviously can’t show in a screenshot, but I might try and get some video up later.

For those of you who might be in the market for sound effects and are willing to pay a little bit, I really recommend Affordable Audio 4 Everyone. They sell packs of professional-quality sounds for way cheaper than most libraries out there. Plus, a portion of the proceeds go to charity so that’s always nice. There are, of course, plenty of free sites with sound effects, but finding high-quality sounds on those can be hard, plus there’s always some worry about whether or not the person uploading the sounds really had the rights to do it (I’ve heard some sounds on some sites tagged as “public domain” that I’m almost certain came from a commercial product).

I have had some good luck on Open Game Art. The quality there seems to be a little better than other free sites, and people who upload sounds they didn’t make usually include links to the original so you can check it out and make sure it’s legit.

I’ve also recently found Sweet Sound Effects. It’s another free site, but the sounds are all made by one guy, so they should be legit. I haven’t tried many of their sounds yet, but it seems like a good resource.

Finally, I’ve realized I really need to step up my marketing materials. I’ve put up a website for Possession 2, and I’m working on a trailer. I also need to buckle down and get an acceptable preview version out. Need to start getting the word out a little better so there’s people who actually want to play the game once it comes out. I hate doing marketing stuff, but it’s a necessary evil I guess. 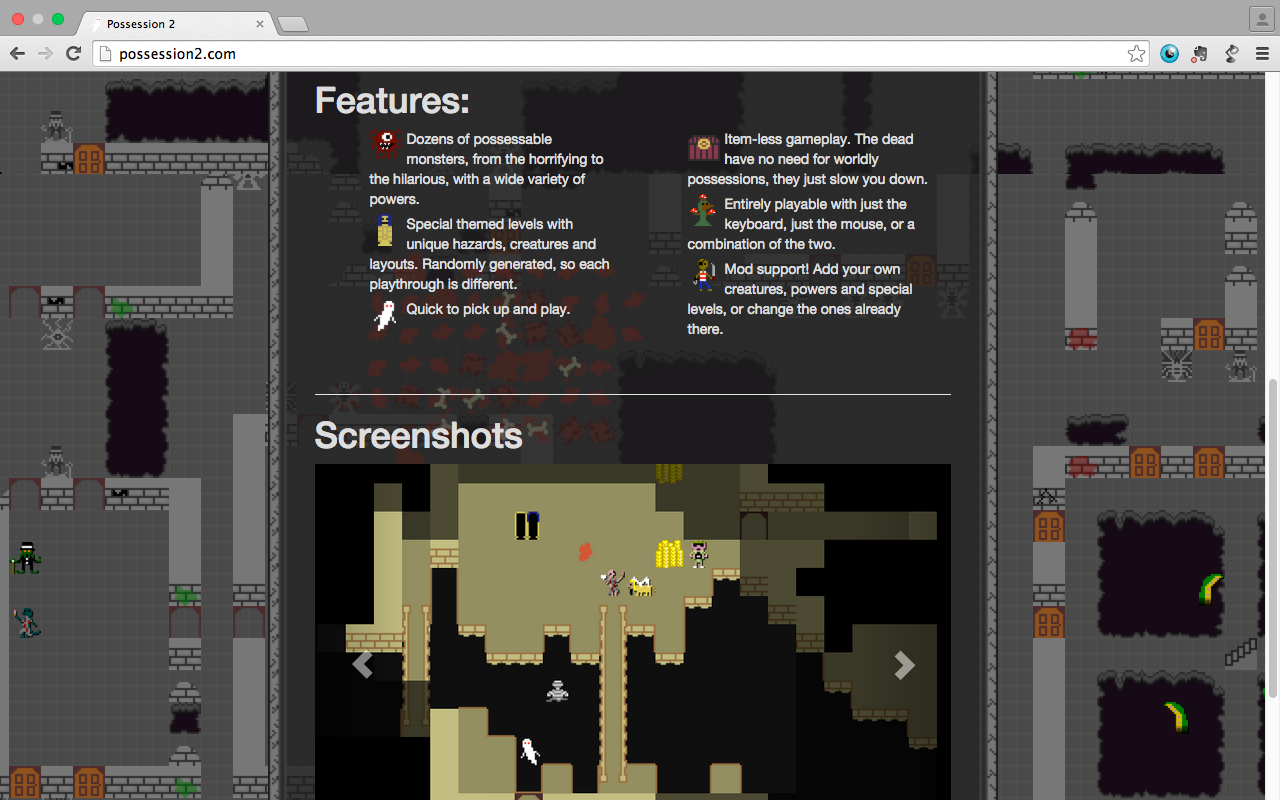 Anyway, I do have some blog posts already written and ready, so there won’t be another four months until the next post this time.